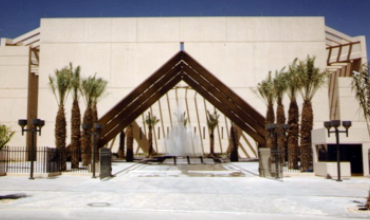 In 1976 Saudi Arabia decided to move its foreign embassy district from the port city of Jeddah to inland Riyadh. Every country had to build a new embassy in the new International Diplomatic Quarter, a remarkable site, which was near the surrounding desserts, the Saudi government assumed responsibility for its creation. Roads, schools, systems for water, sewage and electricity. Ambassador Culter said, despite their power and prestige on the international scene, the Saudis have not lost their pride in their great heritage – their love for the dessert. CRSS if Houston designed the impressive embassy. The art collection features on photos, and items that relate to the desserts in Riyadh and the southwestern dessert region of the US. The antique Saudi door was a gift from Aramco Oil. The collection was designed and installed by Dale Egee, London, who had done many collections for the King of Saudi Arabia and the leading curatorial expert in this region of the world.