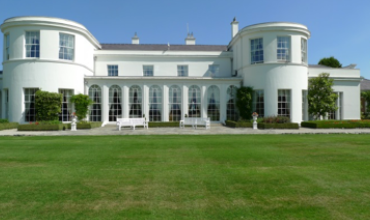 The United States has had a presence in Ireland since 1925. The first envoy arrived in 1927 and Deerfield house, a residence located inside of Phoenix Park and constructed in 1772, was leased to serve as a residence and legation. In 1949, the legation was elevated to an embassy and a 99 year lease was signed with the Irish Board of Works to lease Deerfield house along with 70 acres of land. The property has been used solely as the Ambassador’s Residence since. In return the United States became responsible for the maintenance of the house and grounds. The Deputy Ambassador’s Residence was constructed in the city in 1885 and purchased by the United States in 1948. Both properties are designated historic structures within Dublin, and the United States government has taken pride in maintaining the properties to the standards required as a part of cultural diplomacy and respect. Now, however, many major systems and elements of the properties have gone beyond their life span and are in need of replacement.

Rehabilitation of the Ambassador and Deputy Ambassador residences and grounds.