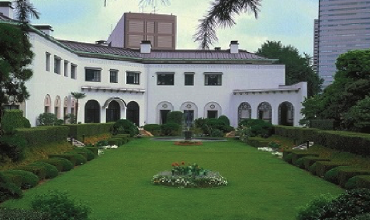 Today the Ambassador’s residence serves as a significant symbol of the diplomatic ties between Japan and the United States that have existed for over 150 years.  In 1923, the Great Kanto earthquake and subsequent fire left much of the Minato neighborhood and Tokyo devastated. In 1925, plans were developed for a new ambassador’s residence, which was to include a prominent space for a garden.  The garden landscape was an especially important element for a diplomatic residence in Japan, a country whose culture values harmony with nature, a concept manifest in unity between house and garden. The garden was designed by Harold Van Buren Magonigle and Antonin Raymond, the architects for the house. Some of the trees still remain from the original design period, but several have been lost and the original landscape has been altered over time from lack of a maintenance plan

To restore the landscape to its original picturesque design, including a sunken lawn with fountain, wind-swept form trees, hedges, stepping-stone footpaths, and an allée flanking the entrance drive.