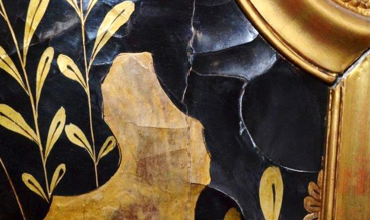 The Pontalba Salon with ten Chinese lacquer panels “was the talk of allParis when the Baroness Pontalba installed them” quoted Bruno Pons, Director of French Patrimony in 1983. Edmond de Rothschild later acquired them and installed them in his hôtel which replaces the Pontalba building. Removed in the late 1940’s, the panels were found in 1996 and acquired by the U.S. Government in 1998. Bernard Steinitz, the antique dealer who had the panels, donated two years of his skilled artisans time to restore the panels as well as the time to install them to thank the United States government for helping his family during World War II.

Exploratory conservation and repair of the Chinese lacquer panels to determine whether it is necessary to do a full removal for the repainting and the discolored European varnish that is on top of the original vegetable lacquer.